Every year in the month of March, usually in the latter half of the month India celebrates the kaleidoscopic festival of Holi -heralding the passing of winter and the arrival of spring. On this auspicious day, hundreds and thousands of people come out into the streets for a silly, delighted battle of rainbow–coloured powders. Likewise every festival in India, Holi too has its fair choice of foods and sweet dishes and no one can forget the strong bhang that is specific to this festival. Below are given the 10 Tourist destinations in India where the Festival of Colours- Holi is celebrated with much enthusiasm and gaiety.

Though the selection of the destination is completely based on what type of experience you want to have. Check out the places with entirely different Holi festival celebrations that attract you the most 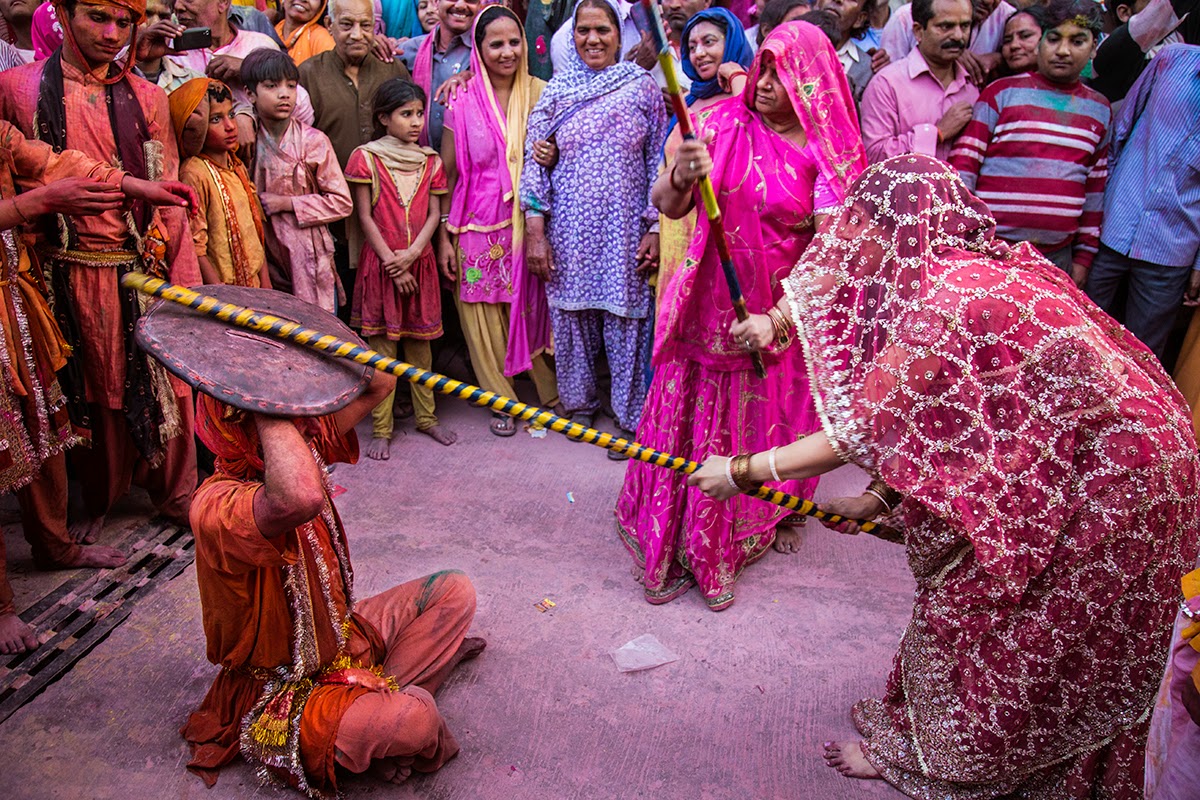 Indian men don’t always rule the roost! In what is known as Lathmar Holi celebrations Womenfolk, of Barsana– a village near Mathura in Uttar Pradesh greets the men of Nandgaon– the birthplace of Krishna with sticks. Lathmar Holi is conducted a week before the main day of Holi so this year it will happen on March 15. Though completely aware men come fully padded and enjoy the beat from the spirited women. The unlucky ones are made to wear female attire and dance in public. The next day the men of Barsana respond by entering Nandgaon and wet the womenfolk of Nandgaon in colours of kesudo

2) Traditional Holi at Mathura and Vrindavan

To feel the real essence of Holi the best place to be is Mathura Vrindavan- the land of Krishna. Mathura located at a distance of 4 to 5 hours from Delhi is the birthplace of Lord Krishna whereas Vrindavan is the place where he spent his childhood. The legends of Holi is associated with Radha-Krishna and with the cowgirls called gopis. In Mathura and Vrindavan the festival of Holi is celebrated for over a week. The famous Banke Bihari temple and Dwarkadheesh Temple in Mathura is the best place to catch the throwing of colors. At Vishram Ghat, you can see the priests making bhang.

Every year on the eve of Holi to mark the Holi celebrations in Jaipur an elephant festival kicks off. To make Holi more fun frolic, regular events include Elephant parades, elephant beauty contests, folk dances and tug-of-war. You can attend a local Holi Festival celebration at Hotel Surya Villa in Jaipur by being the part of the tour organized by GeTS Holidays. At this Heritage Hotel, their traditional Indian family will join you. You can also go and enjoy Group Holi Celebrations/Eleholi Celebrations that will be conducted at Eleday Farm House. Treat your taste buds with traditional special festive homemade specialties like Gujiya and Mathri.

The Indian state of West Bengal celebrates Holi by the name of Basant Utsav. The Nobel laureate and poet Pt. Rabindra Nath Tagore kick-started the celebrations at Shantiniketan, the University founded by him. As compared to the boisterous Holi which is celebrated in the whole of Indian here at Shantiniketan it is celebrated with grace and dignified manner. In the calm ambience of Shantiniketan the spring is not only welcomed with colours but with songs, dance, chanting of hymns. If someone gets a chance to be part of this elegant way of celebrating Holi, he/she remembers it with fond memory for the rest of their life. Every year, on the eve of Holi at the City Palace of Udaipur in the presence of Mewar’s Royal family Holi Pyre is burnt to ward off evil spirits in a ritual called Holika Dahan. The customs of lighting the Holi pyre is traditionally performed by the current guardian of the Mewar dynasty. During the celebrations, a splendid palace parade from the royal residence to Manek Chowk at the City Palace is conducted. During the parade bedecked horses and royal band participates. Later the traditional sacred fire is lit and an effigy of Holika is also burnt.

7) Holi in the Holy City of Varanasi

In the city of Lord Shiva, only the brave travellers who love the carefree vibe and the enthusiastic celebrations can only celebrate Holi. To add some fun to Holi, bhang mixed in laddoos or milk is served to the people. During Holi, the people and the roads are all slathered in different colours. The mania around colours remains only until noon. During the evening, you can go towards Ghats to enjoy the mellow of unimaginable colours. Do treat your taste buds with traditional homemade gujiya prepared by the local womenfolk.

In Delhi, Holi is a Rowdy Affair. If during the Holi time, you happen to visit any Central Delhi Market area the shopkeepers and children will drench you in dry and wet colours. In Delhi Holi Cow Festival– a festival of colour, madness and music is also conducted. The Holi here is played with organic colours and the environment is also quite safe. However to set everyone mood, people are served with bhang lassis, street food and sprinklers amid DJs and performance by renowned Bands.

9) Carnival of Colours in Goa 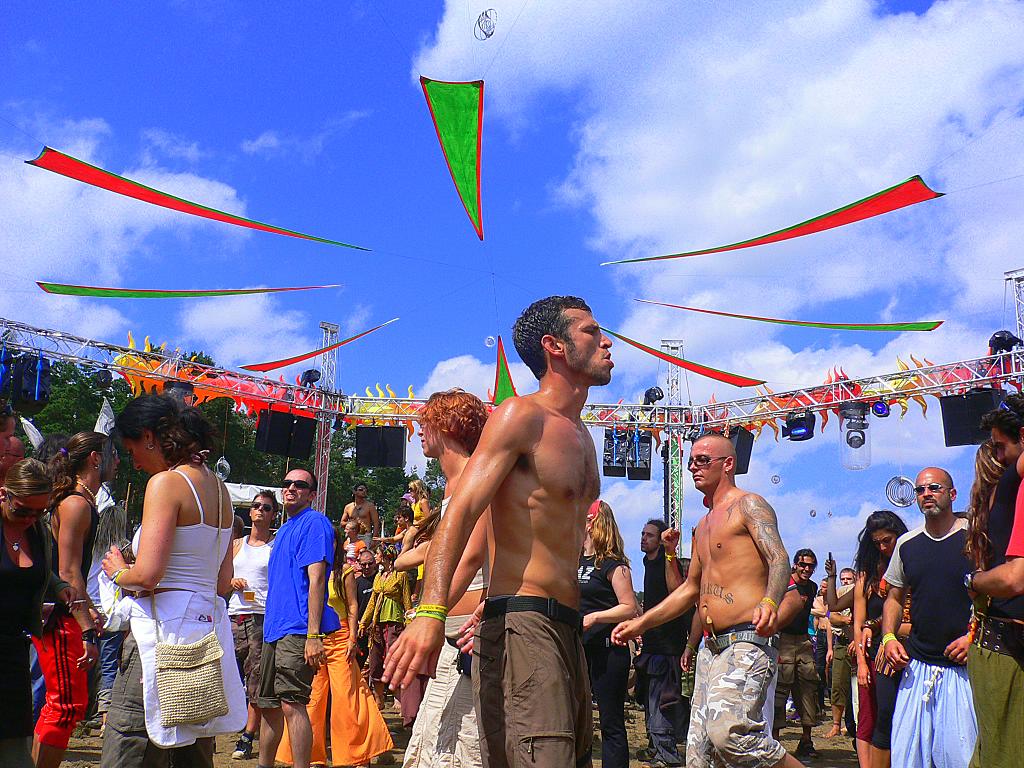 Holi in Goa is celebrated as Shigmotsav and is a kind of mixture between the full-fledged carnival and the festival of colours.  Irrespective of religions, caste creed and colour people from all walks of life come together to drench each other in water and colour. The festival is celebrated over an entire fortnight and on the grand finale colourful parades and folk dance parade are organised by the Goan locals. 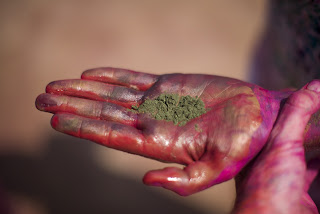 South India is generally avoided in case anyone wants to celebrate an exuberant Holi. Reason being Holi is primarily a north Indian festival; it’s quite subdued at most places in the south. However, Hampi in Karnataka is an exception! Amid loud music of the drums and dance whole town comes out to play on the streets to play Holi. Afterwards, the crowd slowly moves to the river to wash all the color off.

Where are you planning to celebrate Holi this year or in the years to come? Share with us in your comments.